This is our most recent award and recognizes the player whose game has shown the greatest improvement during the latest season. This can be a junior who has demonstrated remarkable growth or an adult who has made outstanding strides.

After playing informally with friends for a few years when he lived in Boston, the 2016-17 squash league gave Dan his first experience in playing organized squash. While struggling a little in the first season, it left him completely hooked and determined to improve. This season, throughout match play and clinics, he has made a remarkable transformation into a tough and determined player with a good understanding of pacing, length, and shot-selection. His teammates have all acknowledged what remarkable progress he has made and certainly, that is reflected in his rating having improved from around a 3.2 to 3.6 during the season.

In his first season playing league, and for that matter, organized squash, Ben developed his skills and strategy on the fly. In his very first match he accepted his opponent’s request to play PAR 11 without any idea what that even meant. He relied purely on his effort and enthusiasm early in the season, losing two of his first three matches. While very few people cover as much ground on the court, he began to transform his game as he discovered that there was more to squash than simply chasing the ball. In an incredibly short time he learned about the previously absent concepts of control, shot selection, and court awareness, winning twelve of his last fifteen matches. He accomplished this while maintaining a cheerful attitude and great sportsmanship, and he will continue to be a passionate student of the game. We’d like to congratulate Ben on winning this year’s SSRA Most Improved Player Award. 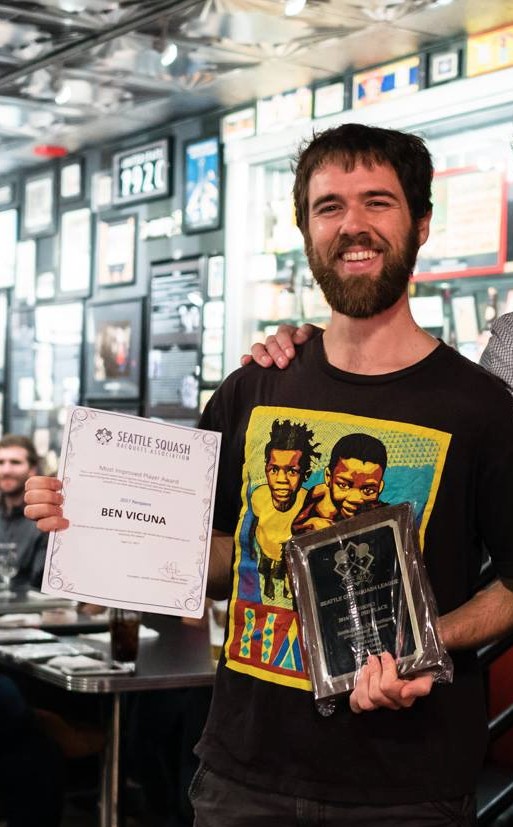